With the victory of Kris Meeke / Paul Nagle and the sixth place of Stéphane Lefebvre / Gabin Moreau, Citroën Total Abu Dhabi WRT achieved its best weekend since the beginning of the year. On the occasion of the only mixed rally of the season, the team led by Yves Matton was able to demonstrate the potential of the C3 WRC on all terrains and to confirm the merits of the work undertaken in recent months.

The Rally of Spain started Friday morning, with a first stage disputed on land. In this context, the influence of the orders of departure and the sweep of the trajectory on the hierarchy constituted the great unknown.

This complex equation, depending on the type of soil, temperature, humidity or tires used, was not answered, and the race quickly fell into a battle between half a dozen pilots! 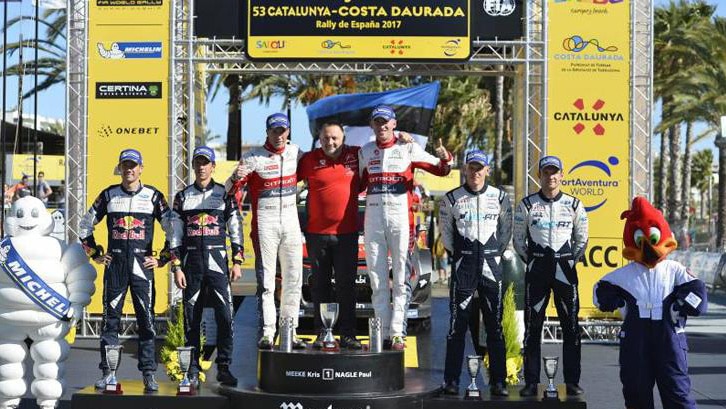 Within this lead group, Kris Meeke was present. After signing the best time of Bot (ES2), he occupied fifth place at midday, despite tender gums having suffered with the heat and the asphalted portions of Terra Alta (ES3). In the afternoon, the Briton was again fastest in the ES5 and returned to third place in the overall standings, 3″ behind the leader.

Back in competition after a long break and confronted with a course he knew little until then, Stéphane Lefebvre was experiencing a start of hard labor. Without making any mistake, the young Frenchman managed to reduce the relative gap with the reference pilots in the second.

He could, therefore, allow himself to limit the risks in the most tragic portions. The rest of the day was marked by incredibly tight lap times between the contenders for victory. However, the leading group was sidelined in the ES12 and Kris returned to the closed park with 13 ” margin on Sébastien Ogier and 14”5 on Ott Tänak.

Like the day before, Stéphane Lefebvre was in discovery mode during the first passage in the stages. Then he took advantage of the experience gained to raise his level of play, all without making any mistake. At the end of this second stage, he was eighth.

On Sunday, the third day was split into six stages, unaccompanied. In the dark of L’Albiol (ES14), the driver of the C3 WRC No. 7 warned his opponents by signing the scratch. He repeated in the two following stages to make a faultless copy, with a 23”9 lead before the final three-stage loop.

The morning was also favorable to Stéphane Lefebvre, launched in pursuit of Mads Østberg. Tied with the Norwegian in the ES14, he was quicker in the two following stages to return to 16 ”. At the same time, Lappi’s and Neuville’s drops pushed him to sixth place overall.

Stéphane was not going to be able to continue his assault, because of a minor hydraulic problem and then a radio link failure in the penultimate special stage. He therefore decided to secure the sixth place finish.

After signing two more scratches – to bring his total to eight out of nineteen specials – Kris Meeke also released in the Power Stage. He still signed the second time before climbing the roof of his C3 WRC to celebrate the victory!